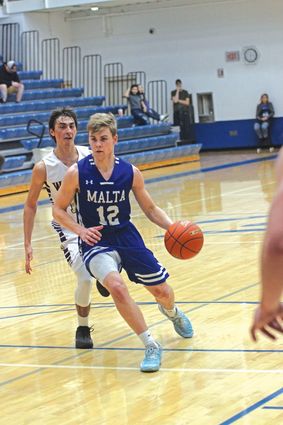 Junior Kooper Oxarart was named the Mustang's Offensive MVP in their 2019-20 campaign. Photo by Pierre Bibbs.

The 2019-20 season for the Mustangs was a real rollercoaster ride type of a season. We started the season against two-time defending state champion Bigfork Vikings at the Coyote Classic in Shelby. Going into that game, the coaching staff did not know what to expect. Our team was young and without a lot of experience as we were starting two seniors, a junior, and two sophomores. The lack of experience did not matter; the Mustangs went out there and played an amazing game defeating Bigfork 65-52.

After the Bigfork contest, the coaching staff and I knew this Mustang team could have a good run...