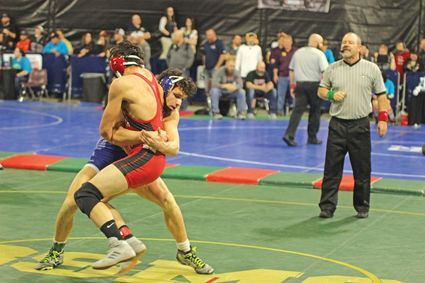 Malta senior Callan Mears was named Malta's Most Valuable Wrestler in the 2019-20 season. Mears finished second in the 160-pound class at state. Photo by Pierre Bibbs.

I would like to start with some thank yous. The administrators were very helpful to me this year, especially Mr. Somerfeld who helped this technology-challenged old coach. Our parents were very supportive and that was a real treat. They made it easy in this transition year. Thanks to our managers, Rya Soul, Georgia Orahood, Lauren Doney and Mady Bain for all their effort this year; we can not make it without their contribution to the program. Last but not least, thanks to our assistant coaches, Jake French and Cody Mikesell. Jake brings a lot of enthusiasm and was able to give kids the hands on knowledge by wrestling with them on most days. Cody was able to wrestle with the kids as well and was dedicated to running morning workouts for kids to be in top condition.

Receiving participants awards this year are Zac Judd, Cash Salsbery, Spencer Gibbs, Colt French, Tye Jones and Dre Oshio. Cash did not step on the competition mat this year due to injury and Zac injured his knee during the season but he ended the season with a winning record. Spencer, Colt, Tye and Dre were all in the upper weights this year. As their bodies mature next year and with time in the weight room, they could have a much different year next year.

Our letter winners for this year are Shane Soul, Kendall Moore, Cameron Mikesell, Camryn Mears and Callan Mears. Shane Soul had a losing record going into the divisional tourney and was ranked eleventh of twelve wrestlers. We felt that he was due for success as he was having some great practices and working hard. Shane went 5-1 at divisionals taking third place and recording five pins for his team. Shane was voted as Most Improved Wrestler by his teammates. We have high hopes for him next year. Kendall Moore also took a losing record into the divisional tourney and was unranked. Kendall took third at divisionals, notably coming back from an 8-0 deficit in the third and fourth match to pin his opponent. We feel that if Kendall would have wrestled throughout his high school career, that he would have been a dominant wrestler.

We had two freshmen place at state this year, which gives them a chance to be on the short list of four-time state placers in Mustang Wrestling History. On that list are Brad Walsh, Wayne French, Tyler French, Michael French and Trey Simanton. Cameron Mikesell wrestled the most matches this year going 42-15 and placing at every tourney except the CMR and Great Falls JV Tourney. He wrestled the eventual state champion in the quarterfinals at state and nearly pinned him in the final seconds. Cameron bounced back to take third place at state with a 5-1 record and four pins. Camryn Mears had a winning record of 37-17 this year. He improved as the year went on, placing first at the Great Falls JV tourney and placed at Harlem and Malta. He was ranked sixth at divisionals and upset the third and second ranked wrestlers to get in the finals. He lost in the finals to a Conrad wrestler to take second. Camryn lost his first match but recorded three pins on his way to placing at state. Camryn took sixth place at state and was the only wrestler from the northern division to place at state. Camryn was voted Most Inspirational Wrestler by his teammates.

Callan Mears was our team captain this year and he was a great example of hard work and discipline for our team. Callan was a four time state qualifier and three time divisional champion. He placed at every tournament this year, except Cut Bank that he was absent from, and was champion of three of those tourneys. He had a 35-9 record this year and notably placed seventh at the prestigious CMR Tourney. Going into the divisional tourney, Callan was ranked second behind Austin Vanek of Cut Bank who had beaten Callan three times this year. Their championship match at divisionals was the most exciting match of that tournament and for our team for the year. Callan won that match mentally before it started and took it to Vanek from the whistle. Callan was dominant on his way to the finals at state recording two pins and a major decision along the way. Callan lost to returning champion Rylin Burns of Colstrip in the State Finals. Callan was a two time state placer for the Mustangs, placing fifth his junior year. Callan was voted Hardest Working Wrestler and Most Valuable Wrestler by his teammates. He will be missed very much.

We are proud of our team's improvement throughout the year. It is tough to learn a new style of wrestling from a new coach. The divisional tournament found the Mustangs at fifth place behind Cut Bank, Simms, Fairfield and Fort Benton/Big Sandy. At state, the Mustangs finished eleventh place, only 6.5 points behind Cut Bank, and far ahead of Simms, Fairfield and Fort Benton/Big Sandy. The Mustangs were the only team from the Northern Division to place three wrestlers at state. We look to the future with high hopes and much improvement in the following years.