With membership down, Malta Walleyes need your help 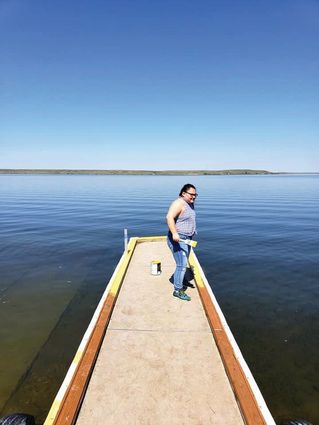 Lavida Grotte-Dalby works on a Malta Walleye project: Painting a yellow warning strip on a dock at Nelson Reservoir (Framers and Ranchers provided the paint) ahead of fishing heating up in the area.

At the high watermark, the Malta Walleye Unlimited Chapter boasts a member roster of 162 people, but because the 31st Annual Banquet was postponed and then canceled due to COVID-19 restriction, the proud membership of the group has dwindled to 18 paid members and has put this year's annual 'Take a Kid Fishing' trip in limbo.

Last week, long time member Pete Dalby (currently the Chapter's vice president) and Don Voegel stopped by the PCN offices and though things are looking a little bleak for the group, both had high spirits about the Malta Walleye's future.

"We have reorganized and reenergized and we are really excited about the Malta Walleyes and the direction we are headed," Voegel said.

The two men talked about important events and deadlines coming up for the Malta Walleyes; deadline for applications for "Take a Kid Fishing Day" Camp Walleye day and getting members back in the fold.

Dalby said that this year, the 'take a kid fishing' is being planned as a day-out instead of an overnight like past events and will be held on Saturday, July 25 starting with breakfast at Westside Café at 7 a.m. Applications for that event can be obtained from Dalby at Hardware Hank, or by calling Voegel at 406-390-1708.

The men said that they are also in need of boat captains and helpers. The day will end around 3:30 p.m. with a barbeque at Trafton Park. Applications for that event are due by July 10 and can also be mailed to PO Box 951 in Malta.

Voegel said that Walleye Chapters' membership across the state of Montana has been decimated and in Malta, a large percentage of members pay their yearly dues when purchasing a ticket to the annual banquet in April, but this year's event never came to fruition.

"What we are going to do is send a letter in the mail with an explanation and a request for renewals to our members," he said. "From 162 to 18 members, we aren't going to be able to hold Camp Walleye or Ice Fishing if the numbers stay that low...we basically lost our funding this year because of COVID-19."