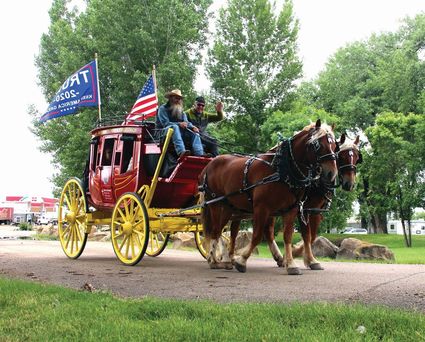 If you happened to drive past the entry to Trafton Park in Malta last Friday you probably saw a red stagecoach with yellow pinstripes sporting both the American Flag and "Trump 2020" flag...you might have even been able to take a spin on the old wagon.

Gene Bushnell, of Troy, Mont., is in the middle of a trek that when he completes will have seen him travel 667 miles on his way to the North Dakota border and then on to Lewistown, Mont., to ride in an Independence Day Parade there. Bushnell, who is the great-nephew of Phillips County's namesake Ben Phillips, has made 18 stops on the journey and was in Malta last Friday morning with a team of two horses and two hands to set up and start giving rides around Trafton Park.

"Our goal is to remind our great state of Montana and our great country of the spirit of the pioneer," Bushnell said. "What better reminder of the old west and frontier day's values than the stagecoach? We believe our pioneers possessed the kind of grace, gumption, and grit that is needed to keep America great. We encourage you to vote for Donald Trump, who has the perfect vision of America."

On hand to help Bushnell with the wagon and the horse team were his nephew, Kelly Bushnell, originally from Montana but living in Nevada, and Josh Regan, his nephew, of Landusky. The two men have been traveling with Bushnell since he left Troy.

"I just think it has been great," Regan said. "Lots of great people and our country is still strong. There are good, hard-working, down to earth people here and that's what this country is all about."

Ahead of Malta, Bushnell said he had traveled from Troy to Libby, Libby to Whitefish, Whitefish to Columbia Falls, Columbia Falls to Big Fork, and on to Kalispell, Shelby, and Harlem.

Bushnell's stagecoach is a replica of the 1880 Abbot & Downing Concord and is built from scraps of oak and iron. Bushnell said that at each stop on his journey, about 150 people have taken him up on his free ride offer.

Maebel Schiffbauer, 13 from Dodson, and her brother, Benjamín, 11, heard from their grandmother that the stagecoach was in town and decided to come down for a ride. Maebel said she and her brother had been aboard a stagecoach before, in Virginia City, Mont., and also got to drive that team.

"It was fun," she said. "I probably won't get to drive these today."

"She did okay," Benjamin said of his sister's driving. "I am ready to get in and go for this one though."

Steve Jillankowski and Edna Smith came up from Landusky to ride the stagecoach and both appreciated the message that Bushnell is sharing as he travels the state.

"The whole process is great," he said. "We are conservatives, American patriots, and Christians so the message is perfect."