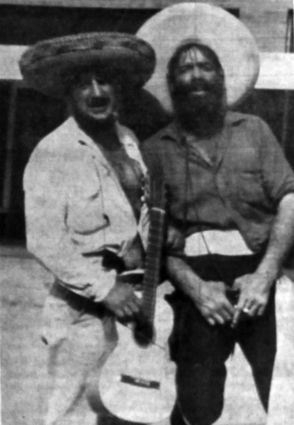 Louie Perry and Bud Hasler, pictured above for the benefit of anyone who might not know them, are the general chairmen for the Milk River Wagon Train which will end up in Malta on Labor Day. The train will start at Zortman and end up in Malta, with three overnight stops along the way at historic stops of the Malta-Zortman freight route. Incidentally, the picture of Perry and Hasler was taken in 1959 when they also played a big part in staging Malta's 50th anniversary celebration. PCN 1970.

The report of the activities of the multi commercial club as prepared by secretary O. P. Shenefelt, listed good roads, fuel distribution, drought relief, Chautauqua, an employment Bureau as the major activities of the past year.

35 bankers attended a group four meeting of the Bankers Association in Malta.

Fred G. Gabriel, county attorney of Phillips County, was the first candidate to file his nominating petition with the secretary of state. Mr. Gabriel was seeking the office of the attorney general on the Republican ticket.

Rainfall for the week total...