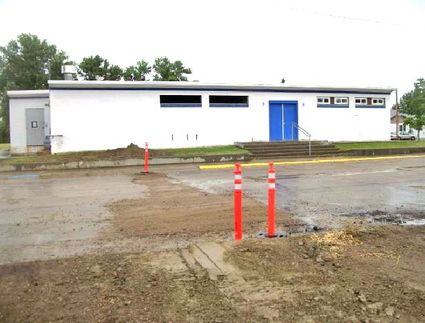 PCN Malta Construction Reporter David Veseth reports that things are coming along nicely at the City of Malta Municipal Pool as the refurbish of the bath house continues. The City of Malta Public Works Crew recently installed new water pipes to accommodate the facility. Photo by David Veseth.

6-24. They have been putting in new water pipes in the Municipal Pool bathhouse in Malta. Workers have been getting new windows put in, replacing the old, worn out windows. A week ago, when I was with Rachel Drabbs, we were driving and Chris Booth was with us, they were working on the streets where the Malta City Shop used to be, also working on water pipes ... 5th street behind the elementary school.

From the Nicholson house across from the hospital, I am hoping Malta Ready Mix can bring me a piece of concrete, so I break it up and then take it to the dump. I use an electric drill for th...