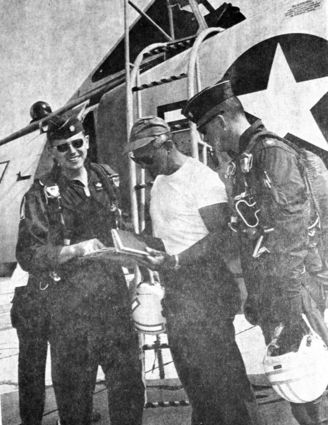 Two natives in Phillips County, Lieutenant Colonel Phillip W. Strope, left, and major William D. Woods, right, are among about 725 Montana Air National Guardsmen on duty until July 4 at the Montana units summer encampment in Gulfport, Miss. Strope, now of Helena, is the son of Mrs. E. P. Stroke of Malta; Woods, now of Great Falls, is the son of W. E. "Timber" Woods of Saco. Both men are F-102 pilots in the Montana unit, which is based in Great Falls. They are shown conferring with Sergeant Dale Nelson, a maintenance crew chief from Great Falls. PCN 1970.

Miss Gertrude Tennant of Fergus Falls, Minn., had arrived to fill the vacancy created by the resignation of Mrs. E. W. Runge as secretary of the Phillips County home service section of the Red Cross.

William Jennings Bryan spoke to a large crowd of Malta residents while the train upon which he was a passenger stopped in Malta. Bryan was on his way to the Democrat National Convention in San Francisco. Bryan had many admirers in Malta, and many were able to shake hands with him when he was introduced by Reverend L. J. Christler of Havre.