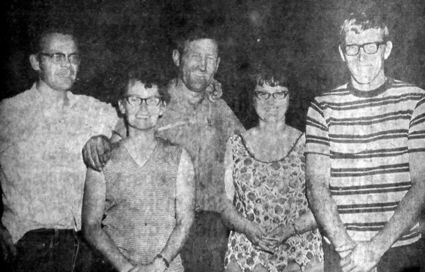 Doug Henry, right, was the first-place winner in the Demolition Derby July 4 in Malta. He received $100 from the Malta Jaycees. Other winners, from the left, are Bob Flesch who took third; Mrs. Larry Miller who won first place in the Powder Puff event; Jerome Depute who took second in the main event, and Mrs. Jess Jones who was second in the event. Photo by Sue Parker, PCN 1970.

A marriage license was issued to Gustavo Torgeson and Luella Marie Reitan, both of Valleytown.

Brad Buckman, 30, a Great Northern watchman, was killed in an accident at the Bowdoin yards.

The Phillips County Farm Bureau was holding a series of schools throughout the County.

Malta residents had taken steps to secure a plot of land owned by R. M. Trafton on the North side of the track to be used for a park and tourist camp.

Frank Leonard and Ione Foster were married by Reverend Schenefelt.

A big July 10 celebration was being advertised by Whit...