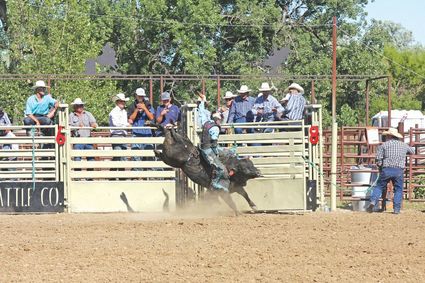 "I think it went over really well," said Trafton Park Arena Committee President Jerey McEwen. "The stock was great, the crowd was awesome and loud, the food was good, and the contestants were top-notch."

McEwen said that spectators and riders offered him positive feedback, saying that they liked the setup of the Trafton Arena. He also mentioned that in future years, he would like to expand the event into a two-night event, which would include a Saturday morning slack.

The PCN caught up with Tanner Solberg of Opheim who won the Ranch Bronc event with a total of 80 points.

"It was just another horse for me, I guess but it was fun," Solberg said with a smile. "It's an adrenaline rush."

Solberg has been competing in bronc rides for five years and also doubles as a bullfighter. When he was asked which he enjoys more, he said he enjoys fighting bulls because of the adrenaline rush.

Solberg has competed in rodeos in Opheim, Hinsdale, and plans to compete in several other rodeos throughout the area including Brockway, Richey, and Havre.

Solberg was asked how the rodeo season has gone with COVID-19 still shutting down events across the country.

"For the open rodeos and NRA rodeos, (COVID) hasn't affected us yet but a lot of the bigger ones have been shut down," Solberg said.

Solberg edged out Allen Webb who scored 79 points. Malta's Oren Mackey posted a score of 67, Coby Kitton had a 64, and Shane Bird Rattler had 59 points.

The rodeo drew in spectators from around and outside of the state of Montana, one couple, Kerry Schwartz and Carl Stroe, came from Walla Walla, Wash., over eight hours both ways. The couple typically attends the Pendleton Round-up in Oregon, a rodeo many call the GROAT or Greatest Rodeo of All Time. The Round-Up had been canceled so Schwartz and Stroe are attending as many rodeos that they can on their way to the east coast.

"I just like seeing people out having fun and see all of the little kids just enjoying themselves, like we should be," Schwartz said.

The largest payout was earned by header Delon Parker of Worden and heeler Ryan Zurcher of Powell in the team roping event. Both members won $942.82 after posting a time of 5.5 seconds. Header Shay Carroll of La Junita and heeler Levi Simpson of Arlington took the runner up prize of $720.98 with a time of 5.6.

Cole Hould of Havre won the Bull Riding event with a score of 77 on the bull named High Noon. Hould took home $419. 24 from the event.

"I drew really well I haven't ever seen that bull before but he was supposed to be the one to have and he really was," Hould said.

Hould shared what he thought of the Malta NRA Rodeo.

"The rodeo was great it had a really good turn out and it went by smooth," Hould said. "I had a good time and I'll be back next year!"

Cut Bank's Jayde Murphy took second in the Bull Riding event, scoring 73 points in a semi-controversial ending, where the announcer initially said he scored 83. Murphy took home $314.43. Kelly Murnion of Jordan took home the third-place prize of $209.62 with a score of 72, and Payton Fitzpatrick was fourth with a score of 65. 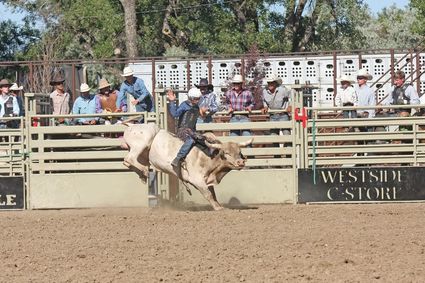 Havre's Cole Hould won the Bull Riding Event at the 2020 Malta NRA Rodeo. Hould had a score of 77. Photo by Pierre Bibbs.