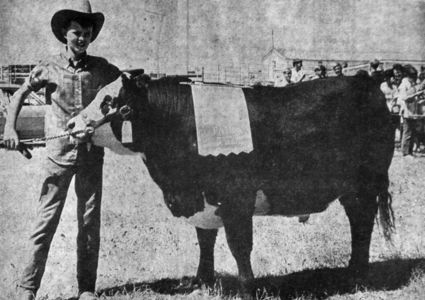 Bruce Hould, son of Mr. and Mrs. Don Hould of Wagner, had the grand champion fat steer at the Phillips County Fair last weekend. The animal was sold to Roger's Lounge in Malta for 44 cents per pound. The 1,170 pound steer brought $514.80. Approximately 90 steers were sold at the auction on Sunday with an average price of $31 to 100 pounds. PCN 1970.

The Mason, Morrison, and Simser families of Lovejoy spent a week in the mountains.

Dane Watson of Malta visited with Harold Christianson at Lovejoy for a week.