From the very beginning, Paul was a very rambunctious imaginative child. He was forever playing make-believe with his siblings, his sisters Serena Cuts The Rope, Ithey Heck, and brother Xavier Buffalo. When they were all together Paul could make dream worlds real, and play elaborate games to make their tiny house in Hays a master fortress that would protect them all. He made sure he always included the pets and shared his humorous caring heart with his siblings.

As Paul grew up he had several endearing friends, Tobias Jones and Eagle Doney to name a few. They would spend many hours and countless nights learning to be young boys doing fun activities such as BB gun wars, forever boasting each other on video games, and of course, going to the Hays powwow camping together at the mission canyon.

As a high schooler at Dodson High, Paul took an interest in taking care of his physique and lifting weights. He played many sports and was a teenager his peers looked up to.

Upon graduation, in May of 2018, Paul made the honorable choice to enlist in the Montana Army National Guard. On June 29th, 2018 he swore in and completed basic training and AIT in Fort Benning Georgia. The same place his father John Doney Graduated from many years before.

Soon after his enlistment, Paul came home to regroup with his unit as Specialist 4 (E-4) of the 1 / 163 Alpha Company in Helena Montana. It is during this time he met the love of his life, Lydia Pocha. Right away they grew in love and by December 21st, 2018 they decided it was time to get married.

It was as a husband and military man that Paul exceeded all expectations. As his unit moved back to Billings so did the happy couple along with Lydia's brother William Pocha. Lydia would begin college at the Bold Beauty Academy learning to be an Esthetician while Paul continued to do monthly training and became very active with his comrades. He found a job working as a tire mechanic to fill his civilian life.

Paul was a bright compassionate strong young man. He was known to sacrifice himself for the lil guy and especially for his furry friends. He never backed down when it came to standing up for himself or his family. He was an intellectual and very book smart. He was someone his lil brother Xavier looked up to and was a role model for his Sisters. 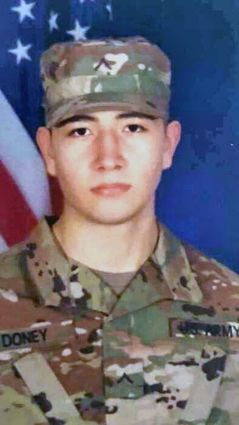 In death welcoming Paul into Heaven is his father John A. Doney, Grandmother Mary C. Doney, Grandfather and Grandmother Clarence & Margaret Cuts The Rope. And Numerous Aunts, Uncles, Cousins on both sides of the family.

Paul was brought home to his house in Hays for the wake on Friday, August 21, at 6 p.m., Rosary and Precautionary feed followed. He traveled by Honorgaurd to the family plot for a Gravesite Funeral and Burial at Dodson Cemetery at 10 a.m. Officiated by Father Josie P. and Assisted by Chaplain Mooney, Montana Army National Gaurd.

Due to Covid Restrictions there was no buffet-style feed and strict precautionary measures will be mandatory.