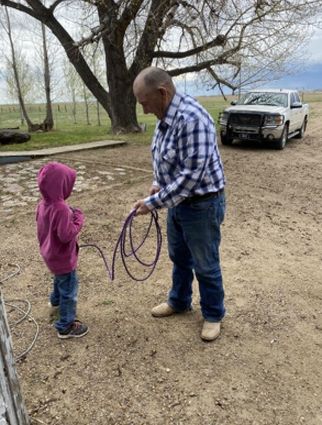 Larry Simpson, who will be the Grand Marshall at this weekend's Saco Fun Day's Parade, with his great-granddaughter Dylan, teaching her how to rope.

Larry Simpson has ridden in every Saco Fun Days parade, except for one, maybe two. One year he had to "go train the Wagon Train" and there might have been a knee surgery one year but that one doesn't count. It did take two years to "train the wagon train," but the second time they came right through town with the parade before heading onto Malta, so he made both.

At 83 years old, Larry is as handsome and charming as ever. He still works at branding time. "I'd guess he hauls more to the fire than the younger boys do," says Larry Ross, his youngest. His oldest son, Clint Simpson, Mayor of Saco, interjects "No question about that!"

Larry Simpson is the Grand Marshall of the Saco Fun Days Parade and I had the pleasure of sitting down with him, Clint, Larry Ross, and Larry Ross's daughter Lainey to talk about the history of Fun Days and their memories of how Larry has been a part of the fabric of Phillips County and Fun Days since the beginning. Audie, the middle son, is out at Bone Trail and not able to meet up with us.

The first rodeo was held north of town at Dick Hay's place. "Remember the year you picked up and bucked out on the same horse?" Clint asked his dad. Larry answers simply, "Oh boy."

Larry Ross says that his first memory of Fun Days was winning (?) the Cow Hide Race out at the ball diamond. "Nowadays you'd have to have a helmet and somebody armor!" Clint says.

By far Larry's greatest memories are from the Big Cattle Drive of '89. He made sure he stepped into Canada before they started their 28-30 day trip to Roundup. (I THINK HE MAY HAVE WENT ALL THE WAY TO TEXAS, WAITING FOR AN ANSWER FROM LR) When asked if he had to open a gate, he just looks at us like we are silly and says, "We didn't need fences back then, and I had Phyllis with me."

Larry's wife Phyllis passed in 2015 and she is still well revered and beloved by her family and the Sleeping Buffalo and Saco communities. "That was one thing that would always make mom mad, she always thought dad was giving away too much beef and hay during Fun Days. She'd say "Give someone else a chance!" says Larry Ross.

One time, a car stopped Larry as he was riding down the road and asked him if there was anywhere that a person could rent a horse. Larry simply told him to hop on his and took over driving. That was how Larry met Andy Mueller, who came back every year for about 20 years to learn how to cowboy. Larry even went to Germany during Oktoberfest one year. "Did anyone call ahead and warn them?" I asked. Larry just grinned and said, "Oh boy, did we have some fun."

Andy was with them on the '89 drive. Larry also took along his granddaughter Amber, who was about seven at the time, for two weeks of the trip. "She might have had to gather a few horses that Andy lost," says Clint.

The most important thing that the boys want to impart about their dad is his love of his grandkids and the love of riding horses he has given them all. Larry's granddaughter Lainey, who is 9 (?) has been busy dusting off pictures for me to see and soak up the stories being told. When I asked her what she has learned from her grandpa, she is quick to answer. "Oh boy, he taught me about horses and riding. Every time I see Grandpa I know he will take me out. He showed me everything, how to saddle, everything. Even when no one else wants to go, grandpa does." Clint interjects, "All the kids will say that, even if they didn't want to go."

When I asked them what the biggest lessons they have learned from their dad, the boys had plenty to say, and I am going to just summarize it here because it feels like a mantra for all of us who live here.

Always be willing to lend a hand to the neighbors.

Treat people the way you want to be treated.

It doesn't cost anything to just say, "Hi".

It ain't gonna break ya to feed someone who is hungry.

Take care of your of your animals, and if you can't, you shouldn't have them.

Get the job done and enjoy what you are doing. If you can't enjoy it, make it fun.

When I asked Larry the biggest lesson he learned from his sons, he just put his head down and grinned, "Oooh . . . boy."

Larry will be riding lead for the Saco Fun Days parade starting at (10 am on Saturday, Sept. 5th) He would really like as many of his friends to ride with him as they can. "We didn't think we'd need a convertible this year," says Clint. "Nope," Larry says. "I've got my own."