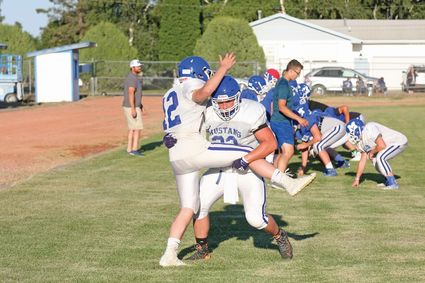 Cash Salsbery tackles Spencer Gibbs during practice prior to the Blue and White Scrimmage last Friday. Photo by Pierre Bibbs.

After months of uncertainty, the Malta Mustangs Football team was able to hold the Blue and White Scrimmage, marking their first event of the 2020 season.

"It has been a weird crazy year since the middle of March so it felt good to get the kids out competing against each other again," Mustangs Head Coach Nick Oxarart said. "It's definitely not quite like the first game against an opponent but it was good to get out on the game field and try to simulate a more game-like environment."

The event was held at Mustang Field this year to not only help protect the players but to maintain an environ...