Susan Haag's son, D'Andre, inspired her to complete challenging program even after his death 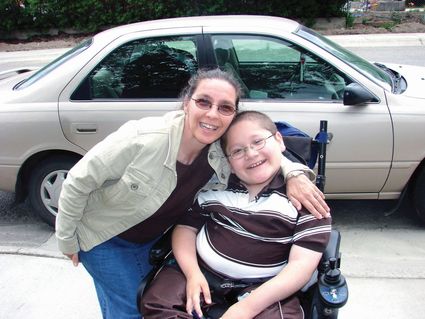 Malta's Susan and D'Andre Haag (who passed away in November of 2018) pose for a picture.

Susan Haag was taking a pharmacology test at the library in Malta in the fall of 2018 when she felt a powerful calling to get to the hospital and see her 21-year-old son, D'Andre.

D'Andre, who had a brittle bone disease called osteogenesis imperfecta type 6, was not expected to live past the age of 12 when the Haags took him in and eventually adopted him when he was a toddler.

"In my spirit, I had to get out of there, so I was just whipping through those questions as fast as I could," she remembered. "Within 10 minutes of us getting there, my husband had just gotten there too, D'Andre passed away.

If I had stayed and finished my test, I would have missed it."

Haag ended up narrowly missing a high enough grade to pass the test even though she basically walked out on the 3.5 hour test she was taking as part of Great Falls College MSU's licensed practical nursing online program.

After the emotional toll of being a wife, mother and student that fall and then D'Andre's death, she didn't intend to continue with the program. She already had a job as a certified nursing assistant at Phillips County Hospital in Malta, where she had worked for 14 years, and the reason she was seeking to become an LPN was to provide care for D'Andre.

She also was nearly 60 years old.

But her instructors at Great Falls College encouraged her to apply again for the program and take it the 2019-2020 school year.

"All of my professors and instructors told me, 'You got to re-apply; you can do this,' but I wasn't going to," she said.

Then a week after his death, one of D'Andre's nurses told Haag about a conversation she had with him shortly before he died.

"My son, just a few hours before he passed away, he said, 'You got to make sure that mom finishes because I know she isn't going to,'" Haag remembered. "Here he is six days after he passed away, and he's still bossing me around."

She laughed heartily at the memory.

Haag did re-apply and was accepted again into the program.

"I re-took the pharm class and passed it flying colors," she said. "And then I started the spring semester and graduated in May."

She had thought about going back to school to become a registered nurse or a practical nurse for years, and people would tell her that she should from time to time, but, "I'd say, 'No,' because I would have to move and that's not an option for us," she would tell people. "I'm not going to move away from my husband, and I have to take care of my son."

But she came across a flyer promoting the online LPN program and learned she could even do her clinicals in Malta, so she applied for the class.

It was tough, but she doesn't have any regrets.

"I got a lot out of this program," she said. "I am thankful. It's not for the faint-hearted. When I first started, it had been 36 years since I was in school and had to study. It was hard to learn all of those skills again."

But the nursing team at Great Falls College helped her through it.

"The faculty in Great Falls were great throughout all of it," she said, even as D'Andre became sick. "In the process, they were like, 'Sue, you got to back off and take care of your family.' Every one of my professors was fantastic through it all."

"Susan has been a pleasure to work with as a PN student at Great Falls College," Swant said. "She has a heart of gold and an extremely strong sense of perseverance. She was committed to achieving her goals and definitely put in a lot of hard work to overcome the obstacles she encountered along the way. Sometimes life has a way of placing mountains in our path, but Susan never lost sight of her goal. She should be extremely proud of what she accomplished. We most certainly are, and Malta is lucky to be gaining such a compassionate, hard-working, determined nurse."

Haag also said her faith and family, including her husband Steven, D'Andre and her four other adult children were critical to getting through the program.

The LPN program at Great Falls College can be taken on campus in Great Falls or remotely.

In fact, students hail from all four corners of Montana.

It also can be taken in a full-time or part-time track so that working professionals who are looking to upskill can continue working in jobs such as CNAs while taking the program.

The full-time track is a one-year program once students have met pre-requisites, and the part-time track takes two years.

"The full-time practical nurse program is challenging and fast-paced, being only two semesters long after pre-requisite courses are completed, and sometimes life can stand in the way," Swant said. "So, it isn't unheard of for students to re-apply to the program the following year to give it another go; we encourage it. This is actually one of the reasons we developed a part-time option."

If interested in learning more about the program, contact Great Falls College's admissions team at 406-268-3700 or Swant at 406-771-4358 to discuss the program and taking the pre-requisites this year to be ready to apply this spring for the 2021-2022 intake.