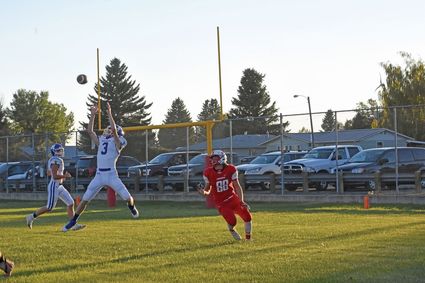 Mustang Juliun Benson goes up for an interception in Malta's win over Conrad last Friday. It would have been Benson's second pick had it not been negated by a penalty. Photo by DoDee Oxarart.

Despite not having the same offensive success that they had in their week one win over Roundup, the Malta Mustangs Football team was able to go 2-0 thanks to a late touchdown drive against Conrad last Friday in Conrad.

The score was 8-6 in Malta's win over Conrad. Previously the Mustangs defeated the Roundup Panthers 50-6.

"After the game was finally over, it felt good to get a conference road victory," Coach Nick Oxarart said. "Conrad is a very good opponent and they played extremely hard and were well-coached. I was really proud of our players for showing great resilience and playing hard...