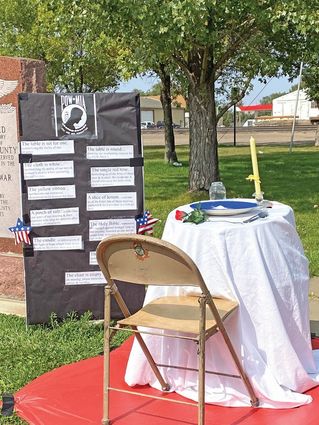 The Missing Man Table, also known as the Fallen Comrade Table, at Veterans Memorial Park in Malta is a semi-official place of honor in some dining facilities of the US armed forces in memory of fallen, missing in action, or prisoner of war military service-members.

According to statistics, there are still 81,755 military men, and women are still not accounted for. Nationally POW/MIA DAY (Prisoner of War/Missing in Action) was observed Friday, September 17th locally. A display was erected at the Veteran's Park on Front Street known as "The Missing Man" and one was also set up in the corridor of Malta High School.

The display was arranged as such: a small table set for one, symbolizing the frailty of one prisoner; it being round showed the everlasting concern for our MIA/POW'S. A white cloth covered the table symbolized the purity of our men and women'...