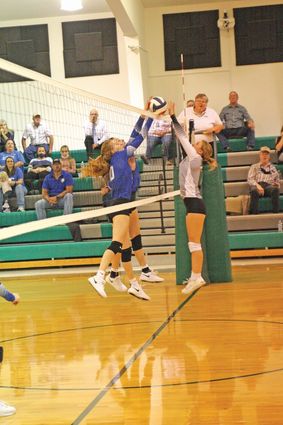 Malta's Allie Kunze and Kaylee Bishop go up for a tip against North Country's Danika Soper. Photo by Pierre Bibbs.

Despite compiling a 9-1 record, Lady Mavericks Coach Charlene Wasson know that the team has work to do.

"I'm proud of this team for where we have come but I know and they know it has to get better each week leading into the postseason if we want to be successful," Coach Wasson said.

"The key to this game was keeping our heads up, not giving up, and pushing," Maverick senior Kia Wasson said.

The Mavericks were led by Kaitlyn McColly who had seven kills. Kia Wasson had six kills and eight digs. Jaydyn Erickson had five kills. Jaycee Erickson had 11 assists and five aces.

Malta was led by Justine Lamb who had five kills. Erica Smith led in digs and assists with 16 and 10 respectively. Smith, Sidney Meeks, Rylee Hines, and Kylie Hunter each had one ace.

The Mavs struggled to close out game three, falling behind 19-24. It was at that time that the team had Jaycee up to serve. With only being one point away for losing a set point, Erickson confidently served with a jump float serve, showing her coach and team confidence.

"That leads to the team being confident in their offense and pounding the ball down," Coach Wasson said. "We also were extremely scrappy in the last 7 points of the match. We wanted to start our 3 game weekend off on the right foot and I think we did a good job of that."

Though the team was tired in the third set, the team refused to let the ball hit the floor during their seven point swing in the third.

"We stayed together as a team and never doubted ourselves," McColly said. "We knew we could do it and we put full faith in our teammates."

Coach Wasson said that the three hour long trip to Westby caused the Mavs to have a sluggish start. During the first set, the team missed four serves in a row, but the team bounced back in the second set.

"We really got rolling offensively and serving was spot on," Coach Wasson said. "They were having a hard time returning our serves and when they served our offense scored points."

Coach Wasson gave credit to the Thunder for their scrappiness, which forced the Mavericks to change their attack style from aggressive, to roll shots and tips.

"In set 3 MonDak got crafty with their shots and caught us off guard with some tips and off shots," Coach Wasson said. "We stayed with our defensive approach and we once again were down in the end and came back for the win."

Going into their match against Culbertson, Coach Wasson expected the game to be more competitive because Culbertson had has a stronger group of hitters. The team's hitting was neutralized by the Mavericks' serving.

"Once again we varied our attacks and caught them off guard a bit with it," Coach Wasson said. "In both set one and two we missed six or maybe seven serves either out of bounds or in the net."

Coach Wasson said that the last three games said a lot about the Mavericks, pointing out that the Mavericks only had three of four games in which the won games in three sets.

"Our timing between setters and hitters is really coming together," Coach Wasson said.

The team is currently on a nine game win streak. The captains were asked their opinions on what has been helping the team keep the streak alive.

"We have been hitting pretty good serves to get us winning sets," K. Wasson said. "And digs. Those help us get hits. Getting a hit every single possession also helps."

McColly said that to keep the streak alive, the team will need to remain competitive during team practices.

Next week the team is set to face Richey-Lamber on Friday, October 2, in Nashua. The games start at 4 p.m. The Mavericks will then host Plentywood in Hinsdale on Saturday, October 3. Games against Plentywood start at 1 p.m.