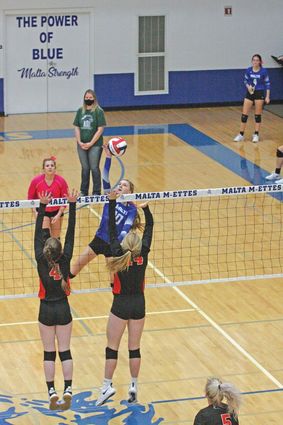 Allie Kunze goes up for a kill in Malta's loss to Chinook last Saturday. Photo by Pierre Bibbs.

The Malta M-ettes volleyball team struggled in their two games last week failing to win a set in their matches against Glasgow and Chinook.

The M-ettes were led by Kaylee Bishop who had five of Malta's 16 kills. Erica Smith had 15 of the team's 40 digs and nine of 14 assists. Justine Lamb and Skylie Lefdahl each had two blocks.

In Malta's 0-3 loss to Chinook on Saturday, October 3, the M-ettes put forth a competitive effort at home but were unable to win a set. The scores were...