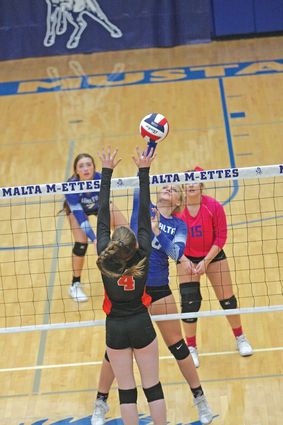 Sidney Meeks goes up for a kill in an earlier game. Photo by Pierre Bibbs.

The Malta M-ettes have a tough week ahead of them as the team is scheduled to play double-headers against Poplar and Wolf Point this week.

Coach Tasha Hines said that the team shuffled things around to better their serve-receive efforts, but the team also was disheartened by multiple calls on their overhead passing.

"It was really hard on the girls and it was hard to push through that," Coach Hines said. "But we were fast and we got some great touches on the blocks."...