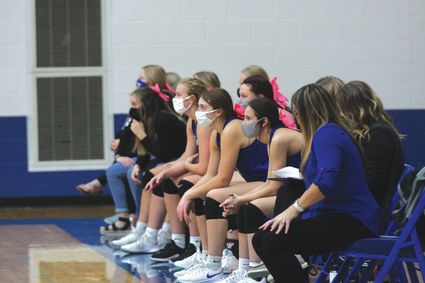 The Malta M-ette Volleyball team's sideline during an earlier game in Malta. Photo by Pierre Bibbs.

The Malta M-ettes Volleyball Team ended their 2020 campaign swinging hard at the Northern B Divisional on Friday, November 6, in Conrad.

The team was defeated by the Fairfield Eagles in the opening round of the event on Thursday, November 5. The M-ettes then defeated the Conrad Cowgirls 3-1 on Thursday evening. The team lost their final game of the year to Shelby in five sets.

"When we were visiting afterward, we were telling them how proud we were," Coach Hines said. "And how proud we were of their teamwork and their ability to hold it together throughout the postseason."

She said that the...