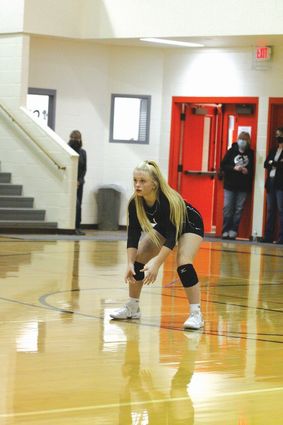 Kora LaBrie gets ready to receive a serve in an earlier game. Photo by Pierre Bibbs.

The North Country Mavericks season ended in consolation as the team went 2-2 at the 2020 Eastern Divisional Tournament in Sidney last weekend.

"This season has been one of a kind," Mavericks Coach Charlene Wasson said. "I believe we gained massive amounts of experience in this season with our underclassman. The seniors exemplified all the qualities you want upperclassman to."

The team had aspirations to reach the State Tournament, which the MHSA announced would be in Malta, but the team fell short after losing 3-2 to Fairview in the semi-finals round of the consolation bracket.