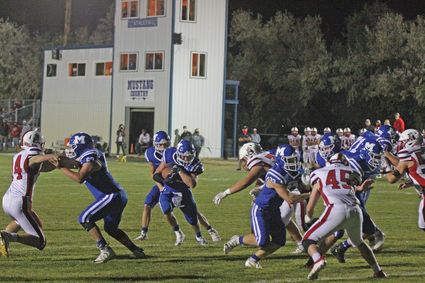 Cash Salsbery receives a handoff from Kooper Oxarart in Malta's win over Glasgow.

The Malta Mustangs football team finished their 2020 campaign in the quarterfinal round of the State B Football Championship Series.

The Mustangs were able to land a conference-leading total of four athletes on the 2020 All-State list. The All-State List includes seniors Pierce Mortenson and Beau Simonson, and juniors Cash Salsbery and Rex Williamson.

"It is quite an honor to get on that list and is a reflection of the team success we had this season," Malta Coach Nick Oxarart said.

For the Northern B All-Conference list, the Mustangs filled a total of 11 spots between the first and second...