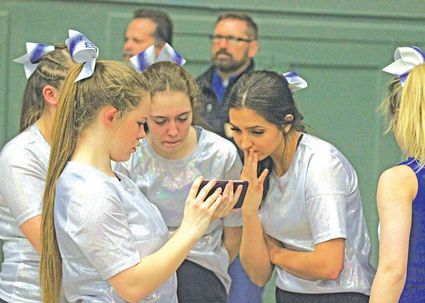 The Malta Cheer Team reviews a performance at the State B Tourney last year. Photo by Pierre Bibbs.

Though other teams around Phillips County started their practices on Monday, December 7, the Malta Cheer Team got going a little sooner, hosting tryouts for the tournament team almost one week sooner, starting on Tuesday, December 1.

Phillips County News caught up with seniors Kailee Crowder and Celine Crasco, who will be in their fourth year of Malta Cheerleading this winter.

"It feels good," Crowder said. "We are starting to get ready for tryouts this week."

The team had 11 students out to join the team this season, each hoping to make the team despite the constant threat of COVID-19 shut...