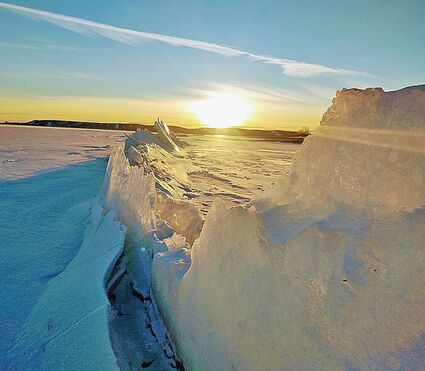 An ice break at Nelson Reservoir, taken on Saturday, December 30. The fast melting of the water at Nelson has stifled the ice fishing season. Photo by Laura Pankratz.

The year 2021 has claimed another event cancellation but this unfortunate call off was not due to COVID-19, but the strange weather conditions in the winter of 2020-21.

The event; the 2021 Ice Fishing Classic, also known as Murph's Memorial, was called off on Tuesday, January 12, due to the status of Nelson Reservoir. Nelson's body of water is typically frozen in January, this year, not so much.

"A couple of weeks ago, I started noticing the ice and I started asking fisherman," event coordinator Rhonda Dalby told the PCN.

She said that there were parts where fishermen could drill through 14 inches of ice and then a few feet away only two inches, which is extremely dangerous.

"I just kept watching the weather and there was open water," Dalby said. "It got worse and I was like, I can't put anybody's life in danger. No tournament is worth that."

Dalby who started the event with Murph's wife Cindy Murphy, heads up the event with husband Chad Grotte, her brother Pete Dalby aka "Prize Patrol Pete," DeeDee Henderson, Jacey Stolem, Sherri Demarais, Becky Siewing, and her mother Lou Dalby. The crew works with Murphy Landing at the Sleeping Buffalo to host the event.

The event typically has around 200 or more anglers from around the state and country and was set for its 15th annual run prior to the whitecap conditions at Nelson.

According to Dalby, there was even a fisherman named Gary, that came every single year from Maine. 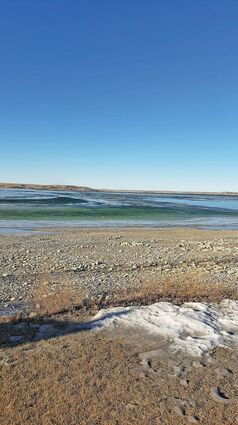 The water at Nelson Reservoir mid-January. Photo by Rhonda Dalby.

"There are a lot of locals in it but there are people that come from Kalispell, Anaconda, Billings, Helena as well as North Dakota and Wyoming," Dalby said. "They used to come up here when Murph was working, so when the tournament started, those people just kept coming and didn't stop."

Dalby said that the anglers that make the trip near and far were heartbroken when they received the call that the Ice Classic Fishing Tournament had been canceled.

The Ice Fishing Classic was started in honor of the late Robert Murphy for it's first ten year's but was changed five years ago.

"People still know it as Murph's and that will not change for some people," Dalby said.

She said that Murph was fun and he was a great guy to work for. Dalby has made every tournament, including in 2009, when she battled cancer.