Mustangs fall to Shelby in thriller 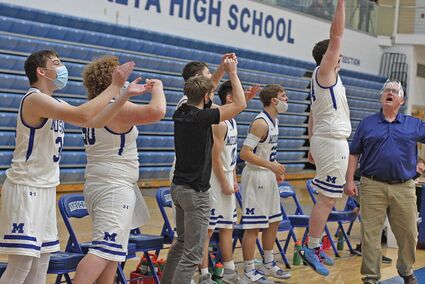 After a few spark plays late in the game against Shelby last Saturday, Malta's bench celebrates. Photo by Pierre Bibbs.

Prior to their clash, Malta defeated the Poplar Indians 66-43 behind Mustang senior Kooper Oxarart's 30 point career-high in Poplar on Friday, January 15.

Malta is set to play a pair of road games next week as they take on the Harlem Wildcats in Harlem on Friday, January 22, at 6:30 p.m. and then the Wolf Point Wolves in Wolf Point on Saturday, January 23, at 6 p.m.

In Malta's loss to Shelby, the Mustangs shocked spectators in the s...