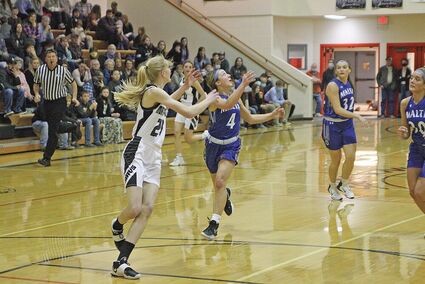 Lady Maverick Teagan Erickson and M-ette Kylee Nelson prepare to jump for a pass in North Country's win over Malta last Saturday in Saco. The teams' varsities met for the first time ever. Photo by Pierre Bibbs.

Last Saturday, Phillips County sports fans were blessed to see two undefeated local teams compete against each other for the first time as the Malta M-ettes took on the North Country Mavericks.

Malta, being a Class B team, typically brings their junior varsity team to face North Country's varsity. Things were different this time around as Saco Athletic Director Barry Malone and Malta Athletic Director Scott King were both sent scrambling for a game after losing games due to COVID-19.

"We were really excited," Lady Maverick Kaitlyn McColly said when asked about hearing they would play Malta....