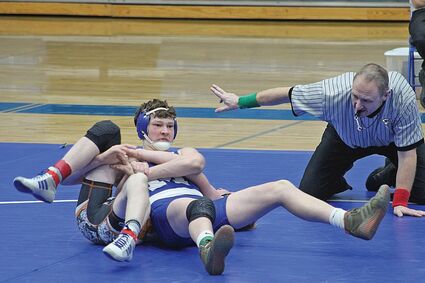 The Malta Mustangs Wrestling Team saw plenty of action in the Malta Gymnasium last weekend, as they hosted Choteau and Colstrip on Friday, January 29, and Circle, Chinook, Choteau, and CJI on Saturday, January 30.

The PCN caught up with Mustang Wrestling Head Coach Jake French after the first round of matches last Friday.

"Things are going good," Coach French said. "We need to keep staying solid. We have some corrections that we need to make and hopefully, we can get better and better each week."

Coach French was encouraged by the quality of the competition that Malta had seen last weekend.

"It's good for our guys to see different people from different places," Coach French said.

In the opening round, Mikesell, a sophomore, wrestling at 126 pounds, led things off with a win in the first match of the night, pinning Matthew Whalen of Colstrip in 59 seconds.

"I had an ankle pick on him first, then I cut him and took him down again," Mikesell said. "Then I got a bloody nose, but blood time wasn't called, so I decided to pin him."

Mikesell admitted that his season was off to a rough start but he hopes to get in the groove as the season reaches its mid-point.

Malta's next win would come in the 160 match after Ca. Mears defeated Colstrip's Zach Cox by a 10-3 decision.

In the next match, French, a 182-pound senior, picked up a 4-0 win over Choteau's Jared Selander.

"It felt great to get a win," Colt said. "Especially at home. I was looking for a pin, but it's good to get a win in Malta."

Keeling, a senior, ended the first round on a positive note, beating Choteau's Jacob Major by 16-4 decision.

"This year is going better than I thought it would, even with COVID," Keeling said after his match. 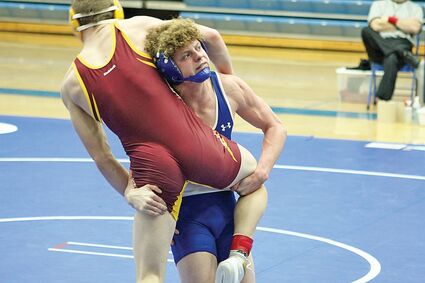 Keeling hopes to improve by working as hard as he can during practice. He also hopes to learn how to perfect his moves.

Mikesell opened the second round, the same as the first, with a win, this time pinning Colstrip's Tye Burge in 3:50. His pin was Malta's last win that night.

The next morning, Co. Mears picked up a win over Chinook's Drake Barreth at 152, and Jones won his match against Choteau's Major at 205.

At the midway point of the season, Coach French gave his thoughts on how the team has been developing.

"They are slowly getting it and I am excited about that," Coach French said of his team.

The team will head to Glasgow on Friday, February 5, to face off against Glasgow, Baker, and Wolf Point, at 5 p.m.