M-ettes pick up two wins and a loss 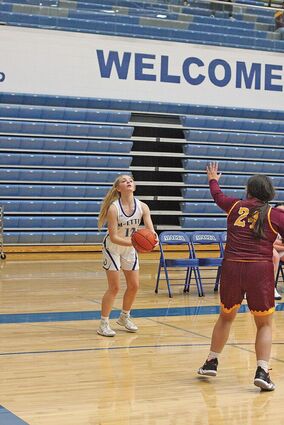 Malta's Brylee French squares up for a three-point shot in Malta's win over Rocky Boy. Photo by Pierre Bibbs.

The Malta M-ettes basketball team posted a dominant 73-16 win over the Rocky Boy Northern Stars on Tuesday, February 2, but would split games later in the week.

The team defeated Froid-Lake 48-39 in Malta on Friday, February 5, and then fell 47-35 to the Roundup Panthers on Saturday, February 6, in Roundup.

In their win over Rocky Boy, Malta was led by Maddie Williamson who scored 15 points.

"We just went out there and had a lot of fun," Williamson told the PCN. "The other team played hard and they were determined and scrappy, but we were having fun."

Williamson said that Malta was able to...