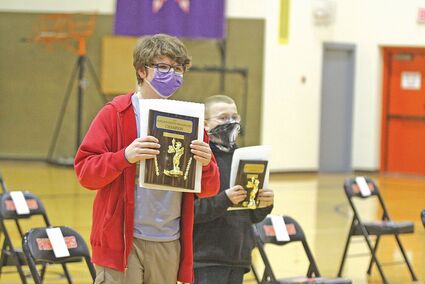 "I had no approach at all," Pippin told the PCN after his win. "I just went there with an empty mind essentially."

The event ended with a little suspense, as Pippin misspelled a word in the 11th round, giving Green a chance to win the event. Green then misspelled his winning attempt.

"It felt unbalanced," Pippin said. "Some were five letter words and some were pretty hard."

Some of the words that stumped competitors were calzone, omen, scald, galaxy, and haven.

Pippin had won the school spelling bee in previous years, but never the County Bee. He joins the list of Saco students, who have won the County crown, including Valarie Barton (1977), Kayla Gairett (2007), and Justin Fun (2008, 2011.)

The Pippin family has been going through a lot this school year, so Carter's win is definitely timely.

"It feels really good," Pippin said. "I am excited to tell my brother, Chayten, and all of my family members that I won."

Being that Pippin will graduate from middle school this year, he left with words of wisdom for those who may be the next champion in 2022. 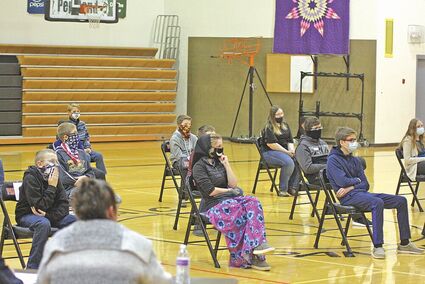 Students from around Phillips County listen to instructions given at the 2021 Phillips County Spelling Bee. The event was held at Saco Public School last Wednesday, February 10. Photo by Pierre Bibbs.

"Don't come here thinking that you are going to win it all just because you studied," Pippin said. "Come into the Spelling Bee or any other thing confident and ready."

Because Green was a school champion who made it to the championship at the county level, his word total will be compared to scores around the state.