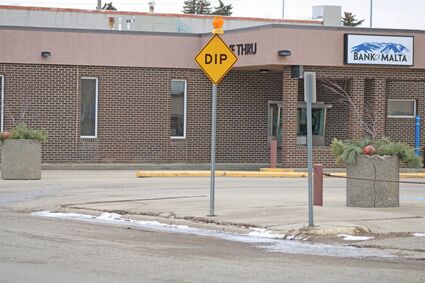 A road warning sign outside of Bank of Malta. Road conditions were a big topic at last week's City Council Meeting. Photo by Mark Foss.

The Malta City Council held its meeting this past Tuesday, February 23, at 5:00 pm in the City Hall. The council started the meeting by approving the minutes of the last meeting, followed by approving the agenda for the meeting. Both were voted on and unanimously passed.

They then went on to review the audit committee for payment of claims and to approve the January 2021 payroll. Both motioned to approve and seconded.

The head of the Department of Public Works, Jim Truelove, then went on to give his report. He stated that the department had deployed two semi-permanent "Dip" street signs on...