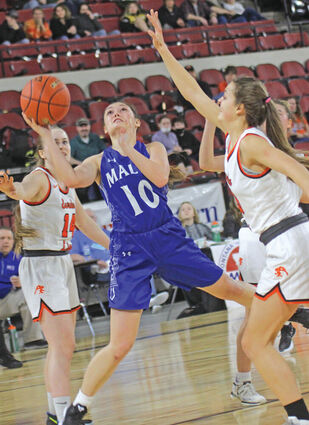 M-ette Erica Smith scores on a layup in Malta's win over Eureka. Photo by Pierre Bibbs.

The Malta M-ettes season ended where many teams would've liked, on Saturday evening of the 2020 State B Girls Basketball Tournament at MetraPark in Billings.

The M-ettes went 2-2 at state, placing fourth at the event following a 46-24 loss in the consolation finals to the Roundup Panthers.

The M-ettes kicked off their week in Billings with a 61-45 win over the Missoula-Loyola by breaking the Breakers Hearts. The Breakers were last year's co-champion with Forsyth in the shortened 2020 State B Tourney in Butte.

Malta would go on to lose their semi-final match against the Big Timber (Sweetgras...