Mustangs sixth at first meet since 2019 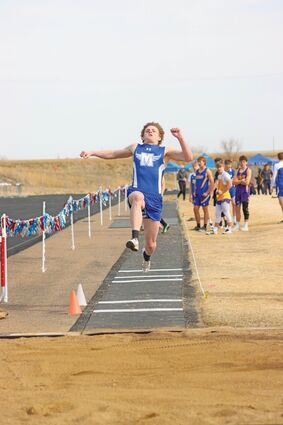 Camryn Mears gets airborne in the long jump at the Glasgow invitational.

The Malta Mustangs joined 26 other teams for their first track and field event since 2019, last Thursday, April 1, in Glasgow.

Malta placed sixth amongst all teams at the event and was the third ranked Class B team in terms of scoring. The event was won by the Class C Hinsdale Raiders who scored 76 points. Class A Havre was second with 65 points. Wolf Point was third with 55 points, Plentywood was fourth with 49 points, Glasgow was fifth with 44 points. Malta had 38 points.

The Mustangs were led by junior Cash Salsbery who took first...