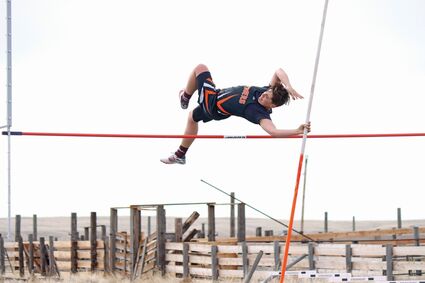 Marshall Caves clears the bar in pole vault at the Whitewater Invitational earlier this season. Photo by Pierre Bibbs.

The Phillips County Track teams all competed at the Gene Nelson Memorial Inviational in Wolf Point last Friday, May 7, at Lowry field.

The M-ettes were the highest scoring Phillips County team, placing second in the girls' meet while racking up 78 points. Not too far behind Malta were the fourth place Class C Saco Lady Panthers who scored a total of 64 points, one point shy of third place Glasgow. The Whitewater girls were eighth amongst teams with 42 points. The girls' meet was won by Circle who had 82 points.

The boys meet had co-winners as both Wolf Point and Glasgow had 89 points. Scob...