Barbara Jean Darrah, 83, passed away with family at her side in Malta, MT, at the Hi-Line Retirement Center on May 15, 2021. Barbara was the 3rd of 12 children born to Henry and Lillian (Fortin) Hanson on June 16, 1937. She was raised in Malta and attended Malta Schools.

Barbara married Darrell Kovach and they made their home in Malta, where they raised three children, Karen, Rhonda, and Darrell. She enjoyed her home and yard and spending time with family including numerous fun-filled weekends at relative's farms, basketball games, and many other family get-togethers, including the annual Christmas Eve celebrations with all of her brothers and sisters at the Hanson family home. Barb was a stay-at-home mom until her kids were in school and then she started work at the Phillips County Health Department where she worked as the secretary for 15 years. Many friendships were made through work and fun times were experienced with her co-workers which they talked about for years.

Barb lost her first husband in 1977. In 1983 she married Robert Darrah and they moved to Havre and made their home there for the next 20 years. She was employed with the Havre Public School system for over 15 years. While in Havre she enjoyed time at their cabin in the Bears Paw Mountains with family and friends, also hosting many annual sisters reunions. The grandchildren always looked forward to grandmas Easter celebration and the ever-exciting Easter egg hunt.

After retiring, they returned to Malta in 2002 where they spent many happy years together. Every morning, coffee would be made and the daily crossword puzzle completed. You may have even seen a game of solitaire being played on her iPad. She enjoyed her time in Malta, supervising the planting of her garden by Bob, Darrell, and Digger, and planting her flower gardens. You did not often find Barb without her make-up, lipstick, and jewelry.

In 2019 Barbara suffered a heart attack and four months later she lost her husband Robert. This was the beginning of a difficult time for her, but she was blessed with good neighbors and felt very safe under their watchful eye. She loved her little rescue dog, Sammy, who was great company. Daily visits from Digger were always entertaining. 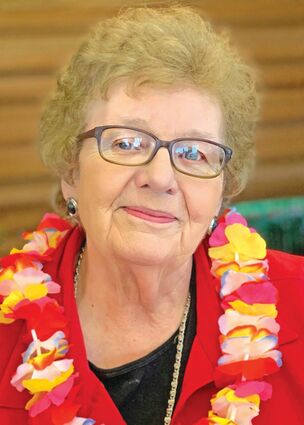 She was preceded in death by her parents Henry and Lillian. Husband Darrell in 1977 and their daughter Rhonda in 2001. Husband Robert in 2019. Siblings, Betty Lou, Billy, JoAnn, Phyllis, and Jerry.

Special Thank you to the staff at the Hi-Line Retirement Center and the Phillips County Hospital.