Malta Elementary Celebrates Three Retirements and One Moving On 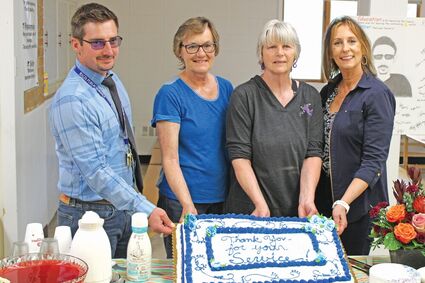 There was a party in the cafeteria of the Malta Elementary School on Wednesday, May 26, at 3:15 p.m. The kids had left school for home, and the teachers started to migrate to the cafeteria to honor four of their co-workers. Some of the family members of the honorees were there as well. Punch and coffee were served with a decorated cake that read thanks for your service.

Barb Buechler, Mary Mangis, Jackie Schwartz, and Corey Clark were being honored. The first three retiring, and Mr. Clark moving on to a different school district.

Barb Buechler started teaching in Malta in 1985, straight out...