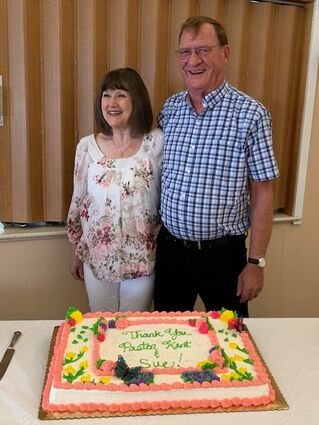 Kent and Susan Gordon stand together at his retirement party at Little White Church on Saturday, June 12. Courtesy Photo.

Since it was established in 1898, the Little White Church (LWC) in Malta had had 40 pastors, it's current minister, Kent Gordon, celebrated his retirement on Saturday, June 12.

Prior to Pastor Kent and his wife, Sue Gordon, moving to Malta in 1993 to lead the church, the church had not seen much longevity at the position, with some pastors staying only a few months and a couple staying for three years of service.

Gordon was a science teacher at Malta High School for 16 of the years that he had been pastoring at LWC. Gordon had also taught prior to moving to Malta.

In a time that science and...