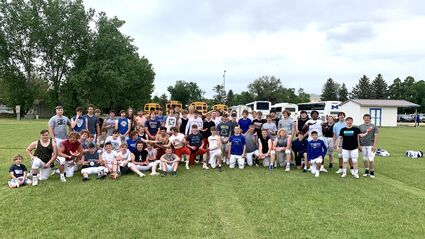 The Malta Mustangs, Glasgow Scotties, and Havre Blue Ponies came together for a football scrimmage last week. The scrimmage was held at the Mustangs' practice field on Tuesday, June 8. Photo by Nick Oxarart.

A trio of Hi-Line teams including the Mustangs, Glasgow Scotties, and Havre Blue Ponies came together for a scrimmage-type camp. Over 40 athletes were in attendance.

"It just gives us a chance to run our plays and start finding which guys can fit into which position as well as how they match up with other teams so that we are not always going up against each other," Coach Oxarart said.

The camp day started with seven-on-seven pass-type plays. The defense stayed on the field for six to sev...