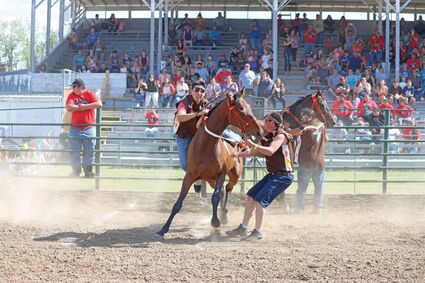 Chris Palmer and Dennis Kittleson take off at the starting line of the Hi-Line Dragstrip. Photo by Mark Foss.

A good amount of seats were taken up in the Grandstands of the Phillips County Fairgrounds last weekend, as the venue hosted the Hi-Line Relay.

The event, which featured three days of action-packed Indian Relay racing, started on Friday, June 25, and concluded on Sunday, June 27.

The event's championship, which was held on Sunday evening, was won by Carlson Relay of the Blackfeet Tribe from Browning, Mont. The PCN was able to catch up with Chazz Racine, the team's rider, who had a dominant weekend, winning the Joe Kirkaldie Memorial Mile earlier that day.

"The key to winning the championsh...