Greg Kielb, of KMMR-MALTA, an FM radio station, holds an award given to KMMR for it's support of the Malta VFW. Photo by Kari Hould.

The Phillips County News and KMMR-FM Radio Station were both recognized and thanked for their support of Veteran projects this week during Military Appreciation Month. Each business was presented with a certficate acknowledging their continued involvement in the sharing of activities and events which honor our military, past and present.

The VFW Auxiliary of Buster Deo Post 4067 presented the certificates to the men behind the support, those being Pierre Bibbs, manager/publisher/editor of the PCN and to Greg Kielb, owner/manager of KMMR-FM.

Articles appear in the PCN as needed and unless there is a huge lineup of articles already, the PCN is more than willing to provide space in the weeks issue or the next one. (*and they seem somewhat trusting as well, seldom modifying the articles!). 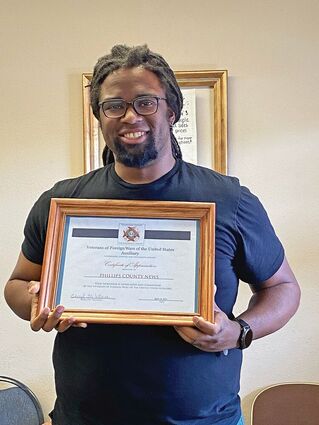 Pierre Bibbs, Publisher of the Phillips County News holds an award given to the PCN for it's support of the Malta VFW. Photo by Kari Hould.

Greg Kielb immediately thanked his office staff of Melissa Campbell, Leslie Schipman and Samantha Starkey for the award, stating it is his staff that is deserving for their work with the entities. It might have been construed that his willingness to share the laurels had something to do with his not wanting his picture taken, however none of them jumped at the opportunity to be in any pictures...a reinforcement of the approval of Greg to support the projects is still his call and they work as a team to keep the sincere dignity and thanks for the service of the Veterans on the airwaves in northeast Montana.

If you happen to see either of these fine outstanding young businessmen and supporters of our Veterans, please extend to them your thanks for all they do for not only our Veterans...for our community as well. Thank you, Pierre and Greg and office staffs. We at the VFW appreciate you and don't say thanks often enough...but you are number one in our world!