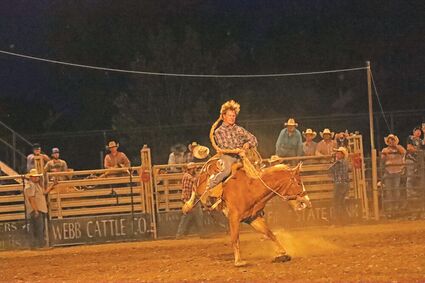 The event is in memory of Craig Mangis who passed away on May 27, 2019. Amongst the hundreds at the event were Mangis' wife Mary Mangis, daughter Katie Skiff, son Matt Mangis (who lives in South Dakota), and Skiff's children McKinley and R.C.

Skiff was asked about the event.

"I think it's awesome," Skiff said. "It is very cool that they are doing this and we as a family just appreciate that they felt the need to honor him. That is pretty cool to us."

Skiff said that all of the events were exciting, but that she was looking forward to the bull riding event.

She was asked what she thinks her father would think of having an event held in his honor.

"I am sure he probably would have been a little embarrassed," Skiff said. "He probably would've given Jerey (McEwen) that look of disgust, like 'why are you doing this' but at the same time, I think that he would be proud that Jerey and the rest of the Trafton Park Arena Committee decided to do something like this to bring people to the arena, bring people to town, and to this event that is super fun for families."

The crowd got a chance to see a special performance that night as Saco's Blake Ozark and Dodson's Anna Brown performed a trick riding show.

The duo started trick riding in January under the watchful eye of Madison McDonald Thomas, a professional, award-winning trick rider that has had a couple of clinics in Malta. The Phillips County duo also saw a couple of other professional trick riders in Chinook; Piper Yule and Shelby Pierson, earlier this year.

Ozark, an eighth-grader, and Brown, a third-grader, were asked how they thought things went at the Craig Mangis Memorial in Malta.

"It was fun and there wasn't as many nerves since we know a lot of people," Ozark said.

"It was really fun," Brown said,

The riders' first show was in Hinsdale on July 4, and Brown said that the show went pretty good.

She felt that the Malta crowd participated well and felt like they enjoyed the show.

The two were asked what their favorite moves were. Ozark's favorite move is the full fender, a no-handed trick where the rider makes the appearance like a fender alongside the horse. Brown's favorite is the hippodrome.

"You just put your feet in straps and find your balance," Brown said.

Ozark's horse is named Taco, and Brown's is named Sweetie.

Devyn Campbell won the Ranch Bronc Riding event, an event that featured close to 20 riders. Three riders tied for second place with 75 points including Colter Salveson, Tanner Solberg, and Enos Miller. Campbell was given the buckle donated by Jim and Kelly Orahood.

The bulls knocked off all riders in the Adult Bull Ride, so the buckle donated by AJ Crasco Bucking Bulls went to contractor Jake Crasco. 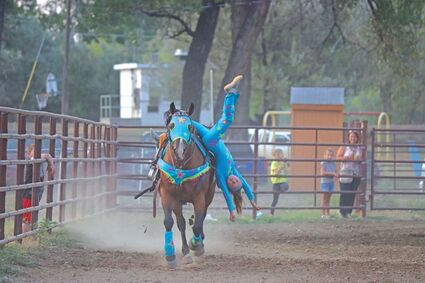 Ethan Liddle scored 76 points on the Jr. Bull Riding event. Stetson Brendt showed the crowd quite a bit of grit that night after being bucked off his bronc right into the fence in front of the crowd. Brent was taken out of the arena in an ambulance, but would later return to ride in the Jr. Bull event.

The Top Hand buckle was given to Dan Phipps, who had to leave the arena due to an injury sustained at the event.

The opening act was the Mutton Bustin event. Kashe Brendt and Kesi Salveson tied for the top ride with 76 points each. Grey Simanton scored 72, Cord Salveson had 70, George Millican had a score of 69, Ridge Beil and Ryett Anderson each had had 65, Casey Green had a score of 64, Sidney Hould and Will Brown had 61, and Whit Ozark had a score of 60.