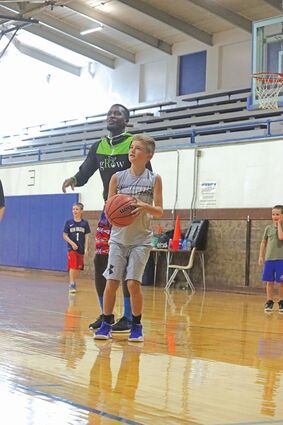 Jace Tollefson shoots a shot during Knockout under the watchful eye of Ro Wiggins of GROw Training. Photo by Pierre Bibbs.

Last week, young basketball players from the Malta community experienced GROw Training, a basketball camp put on by Ro Wiggins, a coach, and trainer who will soon be in Phillips County to stay.

Wiggins, who lives in Boise ID., held a three-day training camp from Monday, August 9, through Wednesday, August 11, at the Malta High School Old Gym. Camp for third through fifth grade was held from 9 a.m. through 10 a.m. Camp for sixth through eighth was held from 11 a.m. to 1 p.m., and high school camp was held from 2 p.m. to 4 p.m.

Wiggins shared his impression of the Malta athletes that he trained on the last day of camp.

"They are a very hard-working group," Wiggins said. "The younger aged kids definitely want to have a lot of fun, so I am glad that I had the patience to slow things down."

Wiggins put an emphasis on listening when needed, but also provided the group with plenty of fun time. He describes his role as a trainer who teaches humility through positivity.

"I'm always showing up to show people that there is more work to be done and more things to be learned," Wiggins said.

He said that the lesson even applies to himself, a thirty-year-old, who learns new things daily from youth of all ages.

Those watching and listening to his training camps will learn that Wiggins can turn any moment of camp into a learning experience. One instance of this was when teams were picked for a five-on-five scrimmage. One athlete did not appear to want to choose his team, though given the leadership role. Wiggins then set the athletes on the line to do bear crawls while explaining, that in life, you should want to be a leader more so than a follower.

He noticed one common thing amongst all age groups in Malta.

He said that he really believes that kids liked his approach to workouts, taking camp and the game of basketball seriously, and his balance.

"If it is chill and respectful, we are having fun out here," Wiggins said. If things are getting out of hand, I gotta straighten things out."

At camp, the athletes worked on fundamentals of the game as well as game situations, and drills that simulated pressure. One such game was knockout, but with a slight twist. No layups.

Typically in knockout, after an athlete misses their first jump shot, they can follow the missed shot with a layup to make the basket before getting "knocked out" by the next shooter. In GROw training, you can only advance by hitting your first shot or a jump shot around a cone area.

"I like to put them in position to know that there is a person behind them trying to get them out, you better step up and make that shot or you will be on the sidelines doing planks," Wiggins said.

A camp favorite for older kids included full-court one-on-one, better known as King of the Court or Queen of the Court for the ladies. The first person to three points or three field goals wins, while the loser of the game runs on the sideline until only one person is left standing.

Wiggins did become acquainted with Malta's basketball history prior to camp, and this generation of athletes left an impression.

He said that their efforts at camp were a testament to the culture that has been built in Malta on the court and at home.

"Humility is something that we all need," Wiggins said.

Last Wednesday, Wiggins was helped by a young lady in a Dodson Coyotes shirt, but that 14-year-old was no Lady Coyote. It was Malta M-ette Kyann Bergos, showing support for Wiggins future destination as boys basketball coach and an assistant physical education teacher at Dodson Schools.

"It's been a lot of fun, learning from what his experiences are and learning what he is teaching the kids," Bergos said. 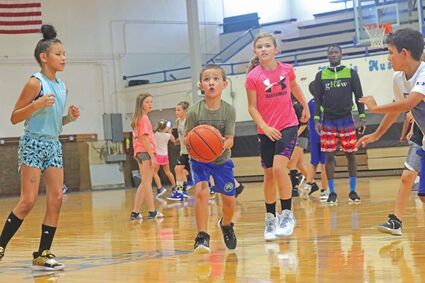 Though Bergos helped with the younger campers, she was unable to attend the high school camp due to a leg injury.

Wiggins said that he is beyond excited to start a new chapter in his life, with a move to Dodson, where he held a camp late last June.

"I have made a commitment not only to help those kids progress, but to help the P.E. teachers there because my program is basically P.E.," Wiggins said. "I just want to bring the discipline, structure, and health side of things."

Wiggins, his wife Jaycee, and baby daughter Zaya, will be moving to the area in the near future.

"Boise is booming a little too much for our taste," Wiggins said. "We just want quiet, a routine, and to be on our own."

GROw training is available for schools around the state during the summer months. And personal training will be available to athletes around Dodson.