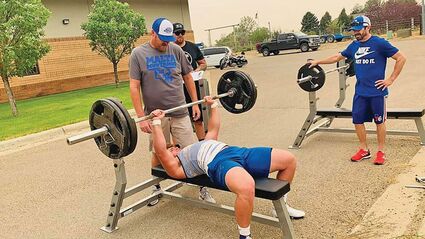 Cash Salsbery, senior running back and linebacker for the Malta Mustangs participates in the Bench Press event at the 2021 Malta Mustangs Football Combine. Photo by Nick Oxarart.

The Malta Mustangs Football team started practices on Monday, August 16, but one highlight of the week was day two, a day that featured a college-style combine event.

During this event, last Tuesday, August 16, athletes were timed and reps were taken down to gauge where the athletes were heading into the 2021 Class B football season.