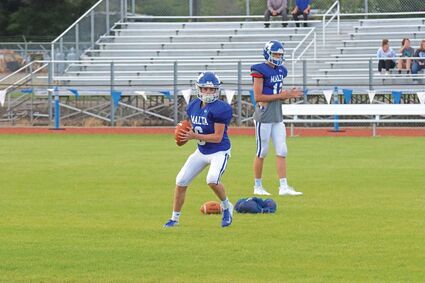 Freshman Stockton Oxarart's efforts in the offseason and during the team's Blue and White Scrimmage earned him some respect amoungst his teammates. Photo by Pierre Bibbs.

While other Class B Schools kicked off their regular season last Friday. August 27, the Malta Mustangs held their annual Blue and White Scrimmage Game, for the second year at Mustang Field.

The practice was open to the public, and the crowd experienced plays that the Mustangs have been working on as the Malta varsity and junior varsity teams mixed and matched their squads to better themselves before their first game of the season on Friday, September 3, against Huntley Project.

After Malta ran dozens of plays, the PCN caught up with senior running back Cash Salsbery and senior quarterback C...