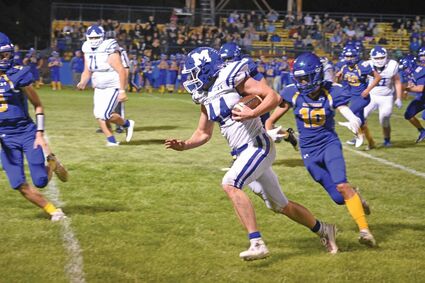 Malta's Camryn Mears led Malta in rushing attempts, with 16. He had 155 yards and two touchdowns. Photo by DoDee Oxarart.

"We have had a great start to our season," Malta Head Coach Nick Oxarart said. "We have used our three non-conference games as opportunities to get better and get ready for conference play."

The Mustangs will aim for their fourth win of the season in Wolf Point, as they travel to take on the Wolves, who are currently 1-3. The game is the team's first conference game of the season.

"Wolf Point is a fairly young football team, but they have plenty of playmakers," Malt...