Mustangs now 6-0, headed to Glasgow to take on 5-1 Scotties 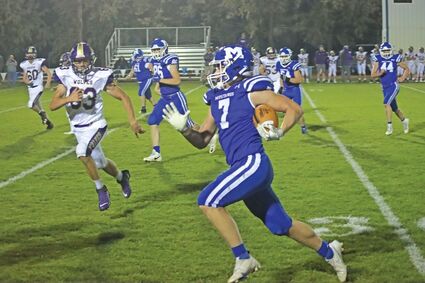 The Malta Mustangs Football Team (6-0) is one of only three Class B Teams with a perfect record, but this Friday, October 15, the top team in the Northern B, will be challenged by the rival Glasgow Scotties in Glasgow.

The Glasgow Scotties have only one blemish on their record, which came in the first week of the season. The Scotties fell 28-14 to the Shepherd Mustangs, but since have been on a six-game win streak. The Scotties' last win was a 30-8 victory over the Conrad Cowboys. The Scotties ended the Fairfield Eagles 48 game win streak against 2B opponents on Friday, October 1.

In the win over Fairfield, Glasgow had three offensive touchdowns and a 75-yard kickoff return. Glasgow leaned on their run game to score two-point conversions on each of their touchdowns and converted each try.

The kickoff against Glasgow is scheduled for 7 p.m. in Glasgow.

In their 20-0 win over the Cut Bank Wolves in Malta last Friday, October 8, the Mustangs had a total of 300 yards of offense, led by senior quarterback Connor Tuss, who had three touchdowns, two interceptions, and 188 yards through the air.

"We had a couple of good plays and some good defensive stops," Mustang Camryn Mears said when asked about the team's win.

Defensive lineman Dwight Werk was asked how it felt to be 6-0.

"It feels good," Werk said. "We work hard in practice every day. We all do our jobs."

Senior Rex Williamson had 126 receiving yards and two touchdowns on three catches. Camryn Mears had one catch for a 14-yard touchdown. Kaden Bishop had 39 yards on two catches and one kick return for 30 yards. Shawn Gilkerson had one catch for nine yards.

Spencer Gibbs had Malta's lone interception, which he returned for 20 yards. Gibbs also recovered a fumble.

The Mustangs overcame a hard defense game in which they posted 12 penalties for 87 yards, the most so far this season.

"They are a good team," Mears said of Cut Bank. "They have a good defense that we have a hard time blocking and finding the open gaps. They had a lot of blitzes."