Walleyes: Hammars Take the Top Mixed Couple of the Year 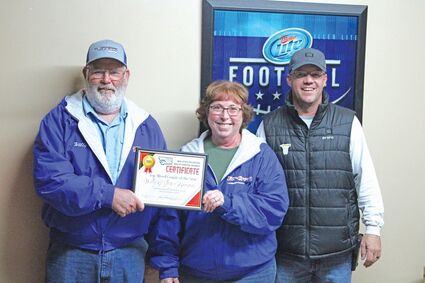 Willie and Joyce Hammar were presented with top honors in the Mixed Couples Division in the Fort Peck Series. Photo by Mark Foss.

Willy and Joyce Hammar took the top honors in the 2021 Mixed Couples division of the Walleyes Unlimited Fort Peck Series.

"It is quite an honor to have a couple with this kind of an accomplishment from our local chapter," said Chapter President Jay Boardman. "Congratulations Willy and Joyce."

The Malta anglers started the season out slow at the Rock Creek Tournament, but picked up momentum in the Governor's Cup with a 57.5 point outing.

They nailed down the top spot for the series with a ninth place overall showing at the Hell Creek Tournament getting themselves 89.04 points.

With their low score for the season taken out, the Hammars won with a total of 146.54 points. Just ahead of Colby and Cierra Loudon of Circle with 137.75, and Eric and Dayle Stahl from Laurel in third with 132.60 points.

"We've always enjoyed fishing together, it's just been the last four years that we've been competing," said Willy.