Mustang 1 is Ready for Duty 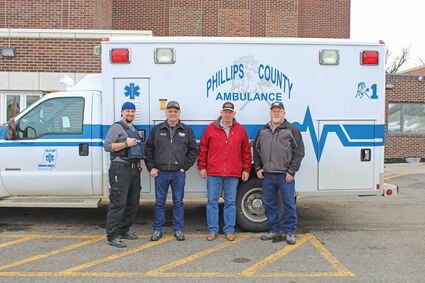 The Phillips County Ambulance Service has a new vehicle in the arsenal. It was purchased from Richland County on September 9th. It has just finished getting a facelift with all new graphics done by Northern Prairie Design and put on by Paul and Kayla Warren.

"We were very fortunate to get this ambulance from Richland County at a very reasonable price," said County Commissioner John Carnahan.

Commissioner Richard Dunbar said, "We were lucky that we called them when we did and got our names on the list first. There were four or five other counties looking to buy as well."

The "new" ambulance is four-wheel drive and has just over 34,000 miles on it.

"We have been wanting a four-wheel-drive ambulance for a while now. To get one at a good price that is just broke in is amazing," said RC Tharp. "It has already come in handy this winter with some of the road conditions."