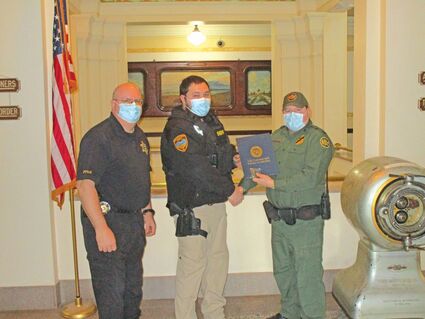 PCSO Sheriff Jerry Lytle and Deputy Taylor Matthews were honored by Malta Border Patrol Station Agent in Charge Branham for an arrest they made late in December. Courtesy Photo.

On Thursday, December 23, 2021, at approximately 0630 hours, Phillips County Dispatch was notified by US Border Patrol that a breach of the border at the Port of Morgan had occurred and they were requesting assistance from the Phillips County Sheriff's Office.

Deputy Taylor Matthews and Sheriff Jerry Lytle responded to the incident. USBP Agent Branham, the Malta Border Patrol Station Agent in Charge (PAIC), was also responding and made contact with the suspect vehicle near the intersection of Highway 204 and US 191 North.

PAIC Branham conducted a traffic stop on the vehicle and took the sus...