Salsbery commits to U of M Western 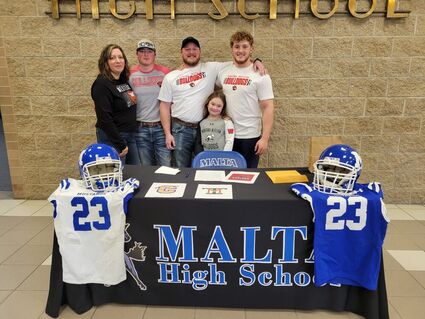 In front of his family and friends, Malta High School senior Cash Salsbery, a Malta Mustang linebacker, was able to reveal his college choice to continue his football career on Thursday, January 27, at 3:30 p.m.

A crowd of about 50 students stepped into the Malta High School foyer to see Salsbery sitting at a table adorned with his home and away Mustang jerseys (#23), a pair of helmets, and laminated cards featuring three schools; Carroll College, Montana Tech, and the University of Montana Western.

Prior to his big decision, MHS Athletic Director and Mustang Football Head Coach Nick Oxarart addressed the crowd. After Oxarart's words, the attention turned solely to Salsbery, who promptly picked up the U of M Western Bulldogs card. After the crowd applauded his decision, Salsbery passed Coach Oxarart a red and black t-shirt.

"I have officially committed to Western," Salsbery told the PCN after the reveal. "I sent off my papers and I am now on the team!"

Salsbery has kept his decision pretty close to the chest, and only a select few from his family knew, but many of his classmates and educators at MHS have been curious all week.

"I made the decision last week, after taking time to get to know all of those guys down there," Salsbery said. "I felt like it was a great place for me."

Salsbery had been to the U of M Western campus in Dillon several times over the past year after the program showed interest in him at their football camp.

"I love the people down there," Salsbery said. "The people are like-minded. I enjoy being around people that like to succeed and like the people around them to succeed. It's really the place for me."

Prior to Dillon's offer, Salsbery had been recruited by Montana Tech in Butte, and then later by Carroll College in Helena.

Salsbery was an All-state selection in 2021 and 2020 and was named First-team All-Conference as a Linebacker and Athlete, playing both running back positions throughout the last season. He earned second-team honors at linebacker in his sophomore season.

In going to Dillon, Salsbery will play middle linebacker in their 4-4 defense, a similar defense that Malta has run during his four seasons as a Mustang.

He was asked what it has meant to him, to play football as a Malta Mustang. He said that it meant family. He also said that in being a Mustang, he has experienced the support of the community.

"Not only, my teammates, but the entire town," Salsbery said. "Everybody is there and everybody has got your back. I really appreciate that."

He said that his favorite memory was defeating Fairfield during his senior season.

Prior to the win, Malta hadn't won a game against Fairfield since 1991.

"It's always exciting to see one of your players go on to college and get recruited," Coach Oxarart said. "It means that he had a great career for Malta. We are sad to see him go, but we are really excited to see him go on to that next level. Western got a good one, and we are hoping to get down there and watch him."

Since Dillon is an NAIA school. Salsbery will possibly play games against different opponents across the state and not too far from Malta. Those schools include Montana State University-Northern (Havre), Carroll College (Helena), Rocky Mountain (Billings), and Montana Tech (Butte).

After the cameras were gone, Salsbery was asked for his opinion on the event, which was decorated by a couple of Malta seniors.