Simanton Square on the National Registry of Historic Places 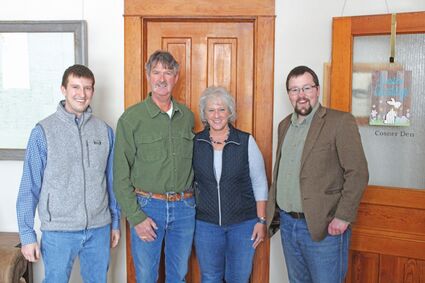 The building that stands at the southeast corner of 1st Street and 1st Ave., originally known as the Edwards and McLellan Block, and now known as Simanton Square has been recognized on the National Register of Historic Places.

Two representatives of Senator Daines's office recently stopped in Malta to get a tour of the historic building.

"I'm glad to see this Malta staple added to the National Registry of Historic Places," said Sen. Daines. "This will help folks experience Malta's rich history dating all the way back to the turn of the 20th century. What a treasure for Phillips County!"

The current owners, Scott and Gina Simanton, have completely refurbished the building that was originally built in 1910 with bricks that were made right across the street at a brick factory.

The lower part of the building was originally a mercantile store and is now the home for Julia's Junque, a vintage store selling redesigned furniture and vintage décor.

The store is 80 percent or more original material, from the original maple wood floors to the ceiling décor panels, including a shotgun blast hole in the ceiling that Gina Simanton says there are two stories to go with how the blast got there. The first is that someone was buying a new shotgun and it went off. The second is that someone was messing with a man's wife and the man came in and fired a warning shot to leave his wife alone. Believe what you want with that story.

The upstairs of the building that originally housed multiple business offices of some of Malta's founders, is now known as the Inn at Simanton Square. A lodging space that has five bedrooms, three bathrooms, a fully stocked kitchen, a dining room, and a cozy den. As well as a rooftop deck.

Owner Scott Simanton spent many hours scraping off layers of paint to bring back the original wood. Each room is named after a business that had occupied the space at some point. Many of them were the original occupants.

The Morrow Suite is named for Dr. William Morrow, a dentist that held his practice there for 30 years. The Edwards and McLellan Suite, two of Malta's most prominent businessmen that built the building in 1910. The A.S. Hanscom Suite is named for an original occupant of the building, a firm that was responsible for land surveys, landlines, property lines, irrigation systems, designs, maps, blueprints, and town site plats. The Siding 54 Suite, as Malta originated as a rail siding in 1887, the Great Northern Railroad was being constructed and the settlement was known as rail siding #54. And the Bureau of Land Management Suite is named for the verbiage hand-painted on the door. The US Department of Interior, Bureau of Land Management, District Grazing Office that once occupied the room.

All of the rooms are furnished with vintage pieces of furniture, most of which were done at Julia's Junque, and items that have been donated.

The Simantons are not finished with the building yet. Along with the help of Phillco, they have put in for a grant to help them work on the cornice of the building, as well as some minor issues in the basement. They will find out if they will receive that in 2023.